This study was originally developed and authored in 2007. In the time since it has been edited and added to several times. New topics have been tackled, further historical research has been inserted and of course, sentence structure has been improved and grammar corrected.

As the full body of work continues to grow and hopefully improve over time, we believe the core themes and specific lessons have remained doctrinally accurate and in line with Scripture. In fact, the primary reason and intent for developing an “Old Testament Survey” of this type and format remain constant — which is, the Old Testament is neglected far too much by “New Testament Christians” when it, in fact, holds the key to unlocking so many concepts and doctrinal truths for any New Testament Christian’s faith.

Why is that so? Maybe 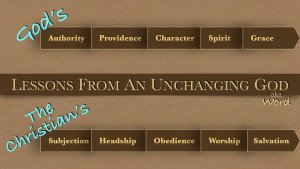 you are asking that question? There are two reasons. The first reason — because Scripture tells us — has always been declared in this Survey. Whether pronounced on the front cover with specific passages or elaborated upon in the “Lesson 1: Introduction” material, the case was made from the beginning regarding the scriptural authority we have to study and apply the Old Testament in a New Testament Christian’s life.

The second reason — because God doesn’t change — has been less obviously covered and is the reason for the addition of this Prologue. In the dozen years since originally compiling this, the Christian’s knowledge of the Old Testament hasn’t improved much (generally speaking). It actually seems to have gotten worse in the sense that many Christians choose to “throw it out” altogether.

No longer is the issue provoking Christians to be more attentive to studying the entirety of God’s word. Instead, some fail to find “the God of the New Testament” within the pages of the inspired Hebrew teachings at all. The entire Old Testament is being cast aside with false notions of grace, judgment, salvation, or the very nature of God. Whatever the reason, we must be able to wrestle and reconcile any incongruity we perceive between the Old and New Testaments in our canon of scripture today. Scripture teaches this as well!

The Christian should know beyond all doubt that they serve a God that is unchanging. Understanding this concept is fundamental for justifying Old Testament study as well as any New Testament doctrine. But the inverse is also true: Misunderstanding or rejecting the O.T. removes the very foundation of the Christian’s faith, opening them up to being “carried about by every wind of doctrine.” (Eph 4:14)

From the pages of the Old Testament into the New, Scripture is clear. Whether it’s His own declarative statement through His prophet Malachi, “I the Lord do not change.” (Mal 3:6) or the Hebrews writer drawing the comparison, “like a garment they will be changed. But you are the same.” (Heb 1:12) These are clear statements of fact, while James puts it more poetically:

“Do not be deceived, my beloved brothers. Every good gift and every perfect gift is from above, coming down from the Father of lights, with whom there is no variation or shadow due to change. Of his own will he brought us forth by the word of truth, that we should be a kind of firstfruits of his creatures.” (Jms 1:16-18)

May we consider “all scripture” as his “word of truth” in order for us to be “firstfruits” indeed.

Please get in touch with us and we will provide, free of charge, the class booklet along with all complementing slide material. Or, a professionally printed booklet can be purchased from Amazon.  This is a comparatively cheap way to produce material for your Bible class given the alternative of printing and copying the PDF yourself.

About the Author: D Brackett

I have lived most of my life as a Christian but admittedly not a serious Bible student until mid-life. I don't hold any theological degrees nor is my profession related to the church or ministry. However, Scripture tells me that God has given us His Word for any layman like myself to understand.

Authors are free to express their conclusions about Bible topics and others are free to offer their thoughts through public comment at the bottom.

In keeping with the mission of this site, all commentary is expected to be based on and backed up by Scripture that is – to the best of the person’s ability – used as Scripture itself would interpret it.

PUBLIC COMMENT POLICY
While your email is required, it will not be posted publically.
All comments are vetted for potential spam before being published, but will not be restricted otherwise.