Can there be too much context in Bible study?

All too often, the proper context in Bible study is an issue. If you think back to the times where context was an issue in Bible study, it was probably because there was not enough — there was too little context being considered. In fact, that’s why “What is the context?” is baked in to every single scripture-block in the Bible Study Framework. It’s vital for any verse or passage that the Bible student understands the immediate context in order to know if/how that verse applies.

But it’s not just the “verse before and after,” especially for difficult passages. We likely need to look across the entire book to understand the author’s point. Paul’s book of Romans is a good example of this; or the book of Ecclesiastes where the author doesn’t really bring the message home until the last chapter. In fact, we could legitimately argue that “full context” is all of the Bible – God’s word. Isn’t that the point of Psalms 119:160?

But can we take that too far?

Yes! It seems to be increasingly important to emphasize the other end of this “context spectrum.” There is an equal – maybe even greater – danger in too much context in Bible study. “All Scripture!” is no longer enough…

Increasingly, it seems religious leaders are incorporating and endorsing the use of extra-biblical sources in order to explain (e.g. interpret) Scripture. While some may readily and rightfully balk at anything other than the Bible being used, there is a far more insidious way by which extra-biblical sources are being introduced. The pendulum of “more context” has now swung from “too little” to where many enthusiastically accept the “culture of the day” as a requirement for the proper understanding of God’s word.

Where in Scripture are we told that our understanding must be governed by or through the lens of the “culture of the day”? Nowhere does God authorize anything like this in His word. These conditions are man-made and constitute the admonition we are given at the close of the Bible in Revelation 22:18.

Why is it happening?

Often, it seems the culprit for man’s accepting, even requiring, this extra-biblical condition for interpretation is his own struggle to understand a difficult passage. Sometimes, that struggle arises because the passage is indeed difficult. But other times, and more typically, the “difficulty” is created because of man’s own limitation.

Maybe they just haven’t come to understand it yet…not having evaluated the full body of God’s word or simply not thought on it long enough. That’s fine; even expected. Peter said Paul’s letters were “hard to understand”. Notice, he didn’t say anything about needing to bring in culture as a result. Instead note what he does warn about happening in 2 Peter 3:15-16!

Or maybe they have been blinded by a doctrine they hold to more closely than a desire to allow God’s word to affect them? We define this as presuppositional scripture weighting. For example, holding so closely to the post-modern, societal ideology of gender equality may lead one to “explain away” very clear Bible teaching about a woman’s role in the church in 1 Timothy 2.

The pendulum of “more context” has now swung from “too little” to where many enthusiastically accept the “culture of the day” as a requirement for the proper understanding of God’s word.

Advancements in archaeology and the ensuing knowledge mankind has regarding ancient history have exploded in the last century. As a result, the Christian has a wealth of new, corroborating evidence about the historical accuracy of the Bible. It is often and correctly footnoted in these conversations that while it’s profoundly interesting as well as faith-building for the Christian, we need not and should not rest on this extra-biblical information for our “great confidence in the faith that is in Christ Jesus.” (I Tim 3:13)

It is the same with the “culture of the day”. It may be interesting, or even faith-building, to have insight into some cultural norm of the first century that further amplifies or corroborates a statement in the New Testament. However, going any further to require something like this for an understanding of God’s will is only adding to His word. 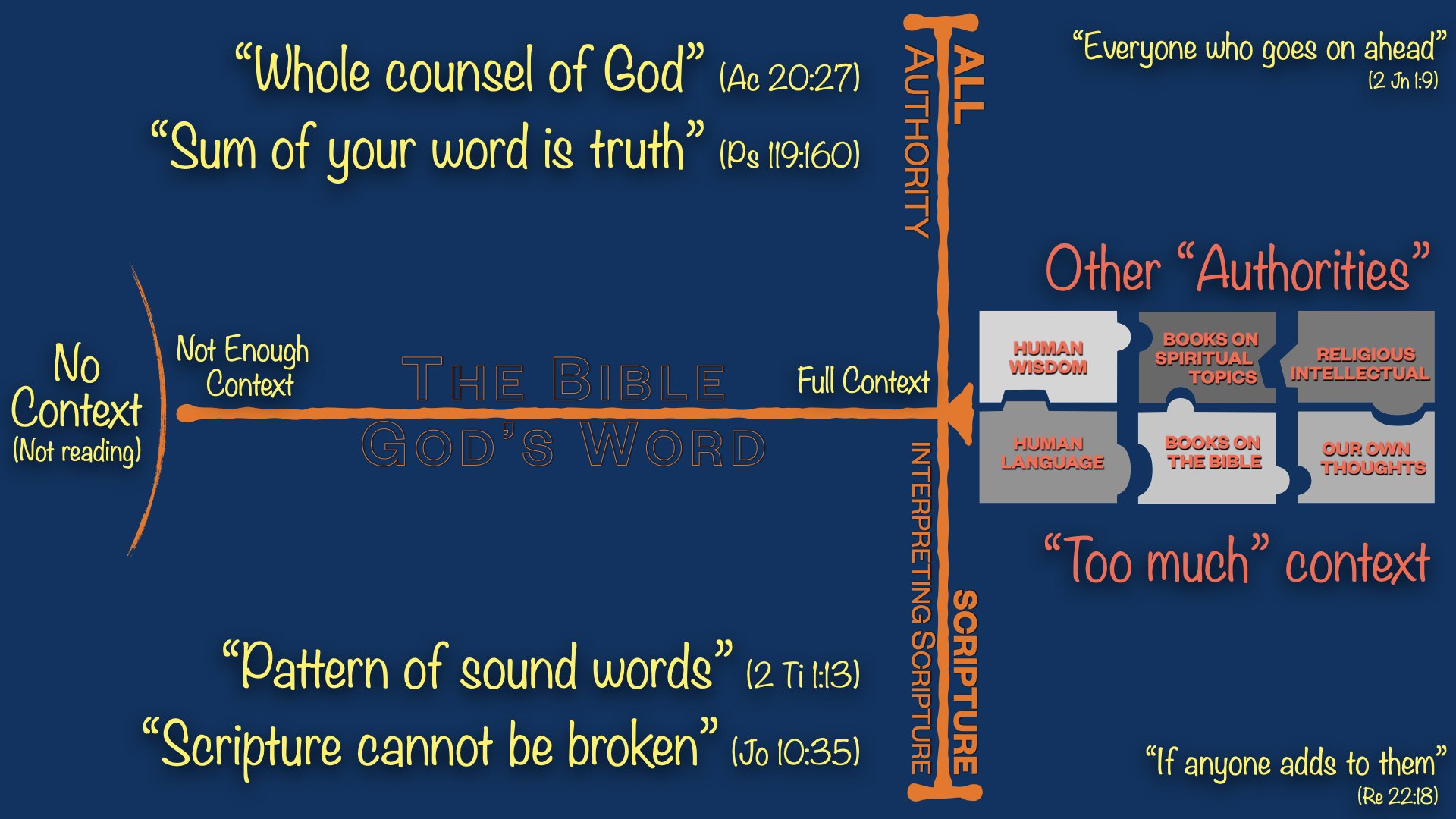 The sum of your word is truth, and every one of your righteous rules endures forever.

All of your word is truth, and all of your commands endure forever.

A great Psalm (119) dedicated to the merit and beauty of God’s word.

I warn everyone hearing this not to add to or take away anything from it.  If you do, God will add to him the plagues and take away his share of eternal salvation described herein.

The closing verses of John’s apocalyptic visions, testified by Jesus (vs 20).

Everyone who goes on ahead and does not abide in the teaching of Christ, does not have God. Whoever abides in the teaching has both the Father and the Son. If anyone comes to you and does not bring this teaching, do not receive him into your house or give him any greeting, for whoever greets him takes part in his wicked works.

Anyone that gets in front of the teaching of Christ does not abide in it and does not have God. You must remain in the teaching to have both the Father and the Son.  If someone comes to you without this teaching, do not honor him with hospitality or acceptance because in so doing you partake in his evil ways.

The apostle John is warning brethren (likely a local church – vs 1) about false teachers (as was much of his first epistle referring to “antichrists” having come).  He specifically tells them to “watch yourselves” (vs 8).

Let a woman learn quietly with all submissiveness. I do not permit a woman to teach or to exercise authority over a man; rather, she is to remain quiet.

Let a woman learn quietly while being submissive.  I do not permit a woman to teach or to exercise authority over a man, rather she is to remain quiet.

Paul, appointed as preacher and apostle in “faith and truth” (vs 7), is instructing the young preacher Timothy in various matters of his personal faith, and in this chapter turns specifically to instructions for members of the church.  He starts with more universal instruction (vss 1-6) before turning to specific roles within local assemblies. First for men (vs 8), women (vss 9-15), elders (3:1-7), and deacons (3:8-13).

And regard the patience of our Lord as salvation, just as also our dear brother Paul wrote to you, according to the wisdom given to him, speaking of these things in all his letters. Some things in these letters are hard to understand, things the ignorant and unstable twist to their own destruction, as they also do to the rest of the scriptures.

Consider also the patience of our Lord as salvation, just as our brother Paul wrote to you in all his letters based on the wisdom given to him. Some of his writings are hard to understand – the things the ignorant and unstable twist to their own demise – just as they do with rest of all scripture.

Peter’s final exhortation to hold a “firm grasp on the truth” (vs 17) and to “continue to grow in the grace and knowledge” of Christ (vs 18).

About the Author: D Brackett

I have lived most of my life as a Christian but admittedly not a serious Bible student until mid-life. I don't hold any theological degrees nor is my profession related to the church or ministry. However, Scripture tells me that God has given us His Word for any layman like myself to understand.

Authors are free to express their conclusions about Bible topics and others are free to offer their thoughts through public comment at the bottom.

In keeping with the mission of this site, all commentary is expected to be based on and backed up by Scripture that is – to the best of the person’s ability – used as Scripture itself would interpret it.

PUBLIC COMMENT POLICY
While your email is required, it will not be posted publically.
All comments are vetted for potential spam before being published, but will not be restricted otherwise.